Tahquamenon Falls State Park encompasses close to 40,000 acres stretching over 13 miles. Most of this is undeveloped woodland without roads, buildings or power lines. The centerpiece of the park, and the very reason for its existence, is the Tahquamenon River, with its waterfalls.

The Upper Falls
One of the largest waterfalls east of the Mississippi. It has a drop of nearly 50 feet and is more than 200 feet across. A maximum flow of more than 50,000 gallons of water per second has been recorded cascading over these falls.

The Lower Falls
Four miles downstream is the Lower Falls, a series of five smaller falls cascading around an island. Although not as dramatic as the Upper Falls, they are equally magnificent. The falls can be viewed from the river bank or from the island, which can be reached by rowboat rented from a park concession. The island walk affords a view of the falls in the south channel.

The Tahquamenon River
Rising from springs north of McMillan and drains the watershed of an area of more than 790 square miles. From its source, it meanders 94 miles before emptying into Whitefish Bay. The amber color of the water is not rust nor is it muddiness; it is caused by tannin leached from the Cedar, Spruce and Hemlock in the swamps drained by the river. The extremely soft water churned by the action of the falls causes the large amounts of foam, which has been the trademark of the Tahquamenon since the days of the voyagers.

Recreational Activities
The park offers visitors a wide variety of recreational opportunities. During the spring and summer, camping, hiking, fishing, canoeing, nature study and photography are popular activities. Fall colors provide a beautiful picturesque view of the park. In addition, hunters will find ample opportunities to pursue their sport. Winter offers opportunity for snowmobiling, cross-country skiing and snowshoeing with miles of marked trails. Ice formations along Lake Superior and frozen waterfalls are a photographer’s delight. Moose are occasionally seen wandering through the park, and from time to time, bald eagles are also spotted by visitors. Black bear, coyotes, otter, deer, fox, porcupine, beaver and mink are a few of the other wildlife which can be seen in the park. The abundant bird life includes spruce grouse, sharptail grouse, pileated woodpeckers and a variety of waterfowl and songbirds. One of the few nesting sites in Michigan for the sandhill crane is found in the park.

Camping
Four campgrounds are available in the park; two modern campgrounds at the Lower Falls and a modern and semi-modern campground at the Rivermouth. Each of the modern campgrounds have approximately 90 sites and each site is equipped with electricity, a fire pit and a table. Hot showers and flush toilets are also features of the modern campground. Sanitation stations are available at the Lower Falls and Rivermouth Units. There is no campground located at the Upper Falls. This is the land of Longfellow’s Hiawatha – “by the rushing Tahquamenaw” Hiawatha built his canoe. Long before the white man set eyes on the river, the abundance of fish in its waters and animals along its shores attracted the Ojibwa Indians, who camped, farmed, fished and trapped along its banks. In the late 1800’s came the lumber barons and the river carried their logs by the millions to the mills. Lumberjacks, who harvested the tall timber, were among the first permanent white settlers in the area.

Nearby Best Up North Lodging >>>

END_OF_DOCUMENT_TOKEN_TO_BE_REPLACED Bond Falls is one of those “best kept secret” spots on the Western Upper Peninsula that you want to make sure you do not miss.

This beautiful water fall is located on the middle branch of the Ontonagon River near Paulding.

Although it does not get the “press” of more famous U.P. water falls, Bond Falls has a large following of admirers and had even been part of a calendar as one of the most scenic natural places in the world!

Here are the latest photos of Bond Falls via instagram. If you have an instagram photo to share of your visit to Bond Falls, choose “Bond Falls” as your location and your photos will appear in the photo stream below.

Superior Falls – Extremely beautiful gorge. Access is moderately easy. Directions: From Hwy US 2 in Ironwood. Go North on Lake Rd. This is approximately 25 mile drive. You will see a marker on the road that says Superior Falls. Turn north (right) on that gravel road. Continue down the small hill to the parking lot. Walk down the road to the River Mouth and Lake Superior. Then walk upstream 1/3 mile to Superior Falls. Superior Dam Falls is a little further upstream. If you have time, stop at Little Girls Point Park for a picnic. You will see this park on Lake Road on your way to the Falls.

Discovery Channel video of Tao Berman shooting through the falls during spring runoff in a kayak. 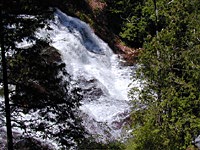 Large beautiful waterfall that is visited by many people. Located just off of M-28 The short hiking trail is well-marked and easy to find.

Directions: Go 6.5 miles East of Bruce Crossing on Hwy M-28. You will see a sign on the Hwy at the Bridge. Park in the parking area on the south. Follow the well marked trail under the bridge to the waterfall.

Directions: From Hwy. US 2 in Bessemer take Powderhorn Rd North. When you come to the T in the road at the stop sign, make a left hand turn on Black River Rd. You will find all the waterfalls on this Road. This road is approximately 14 miles long, ending in the only Harbor & Marina operated by the USDA Forest Service in the lower 48 states.

Great Conglomerate Falls – This is a very large waterfall which is divided by a wide conglomerate rock formation. This waterfall is well marked. Walking trail 3/4 mile.

Potawatomi Falls – Potawatomi, which is barrier free, is one of the most beautiful waterfalls on the Black River. This waterfall is well marked. A restroom is available at this site. Walking trail is approximately 1/8 mile.

Gorge Falls – This conglomerate canyon has a 34 foot drop. Potawatomi and Gorge Falls are acces sible by the same parking area. Walking trail is approximately 1/8 mile.

Sandstone Falls – This waterfall meanders over rocks giving it a unique appearance. It is located on a beautiful spot on the Black River, with a well marked, short 1/4 mile walking trail.

Rainbow Falls – A Beautiful Waterfall that is extremely photogenic on the East part of the River. Enjoy the scenery on your 1/2 mile walk to the waterfall. Take is easy, there are many stairs.

At the Presque Isle Park you will find Manido, Nawadaha, and Manabezho Falls. At the parking areas, you will find signs showing you the way to the waterfalls. Guests are able to walk both sides of the River on a well developed walkway with a suspension bridge over the river.

Caution: The falls and Rapids of the Presque Isle River have very strong currents and numerous deep holes. Please respect the power and hidden dangers of this turbulent and beautiful river. The park includes a picnic, camping, and parking area. There are numerous other waterfalls within the Porcupine Mountains State Parks interior. For more information on these waterfalls you can reach the park office at 906-885- 5275

Directions: Just outside of Wakefield on Hwy M28 take Cty Rd 519 North up a incline. Follow that road! When you come to South Boundary Rd keep going straight (This will lead you to the park). Please take your time and enjoy the view. This road is approximately 22 miles long.

Manabezho Falls – This is a very wide beautiful waterfall with an extremely large drop. Easily – accessible and very few steps.

Manido Falls – This waterfall is a short additional walk from Manabezho Falls. It is smaller than Manabezho Falls, but proves to be just as wide and photogenic.

Nawadaha Falls – This Waterfall is an additional short walk from Manido Falls. The rapid current will be sure to grab your attention.