Photos From the 2012 Fall Color Season

(Due to a server failure photos from 2013 are currently missing. We hope to have some from 2013 online soon.)

Crystal Mountain – Our Buck Hills Range continues to show its fall colors this morning, but winter’s chill is definitely in the air.

Lake of the Clouds – October 10, 2012 via Mountain View Lodges
Overcast, many leaves down and, still gorgeous!

Crystal Mountain – Fall color update – here’s the view from the top of Loki earlier this evening. The center of our village is almost surrounded!

Crystal Mountain – Fall colors in the Betsie River Valley are nearing their peak.

The fall color show on Mackinac Island is bursting forth this week with brilliant displays of gold and orange and crimson. There is still a fair amount of green but the splashes of color throughout the island are especially vibrant this year. Look for absolute peak sometime near this weekend with plenty of color next week and into next weekend.

Lake of the Clouds – October 2, 2012 via Mountain View Lodges

<>
Newberry Michigan – FALL COLOR REPORT – October 2 , 2012 – The colors are now on the downside of peak. I can’t believe how rapidly they have changed. If you wait too much longer, you will miss out on the beauty of the Newberry area! Come on UP! (Photo and report courtesy of Clementz’s Northcountry Campground and Cabins) – http://www.newsupnorth.com/cgi-bin/fallnpr.pl?contactcode=newberry

Caberfae Peaks Resort – October 1, 2012 – The view from the top of North Peak today!

Crystal Mountain – The view from our Loki Lift earlier today. Beautiful display of fall color around the Betsie Valley golf course and our village core.

Western U.P., Michigan – September 30, 2012 – Enjoying a sunday morning coffee & fresh baked cinnamon rolls on the deck with this as a backdrop. makes you want a second cup. via Regal Country Inn

Western U.P., Michigan – FALL COLOR REPORT – September 29 , 2012 – Color everywhere…Were at or very near Peak in Gogebic county. As always, the color changes at varying times in different locations …reds still prevalent…nice deep oranges..the golds are iridescent…and yellows are showing up more and more. You can pick just about any road and drive…you mite want to try some of the lesser traveled roads in the Ottawa…Do a little scouting around and youll find a special spot with gorgeous color. Remember, near the Lake Superior Shore, the colors are usually about a week or more later than inland. The Bessemer Pumpkin Festival is this weekend – September 27 – 30, 2012. – – http://www.newsupnorth.com/cgi-bin/fallnpr.pl?contactcode=westernup

<>
Newberry Michigan – FALL COLOR REPORT – September 29 , 2012 – WHAT A DIFFERENCE 3 DAYS CAN MAKE!!! Of course, the cold nights and frost had to have helped a bit too! Colors are coming on rapidly. You can see the changes now from one day to the next. Ya better make your plans to get here soon!! So, I think I would start making my plans to come on to da Yoop! (Translation; the U.P!) (Photo courtesy of Clementz’s Northcountry Campground and Cabins) – – http://www.newsupnorth.com/cgi-bin/fallnpr.pl?contactcode=newberry

Gaylord Fall Color – September 29, 2011
The fall color is progressing rapidly in the Gaylord area with a plenty of color in the trees for an early color tour this weekend. Some areas will likely be at their peak as soon as this weekend and most of the area should have a substantial amount of peak color through next week and into next weekend.

Some early fall color in the woods of Antrim County near Shanty Creek Resorts. This weekend should be good for an early fall color tour with near peak color as you travel east toward Gaylord.

The colors are gorgeous UP here!!!
By Clementz’s Northcountry Campground and Cabins | View on Facebook 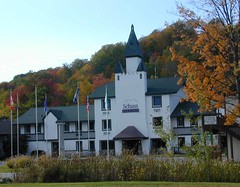 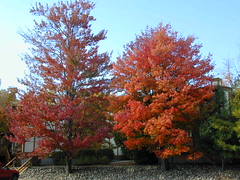 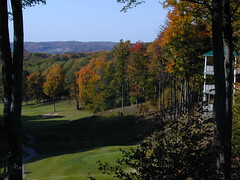 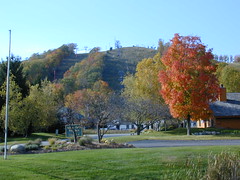 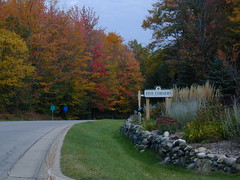 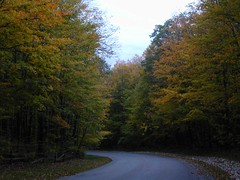 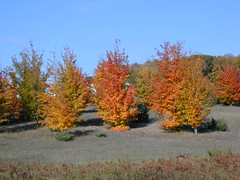 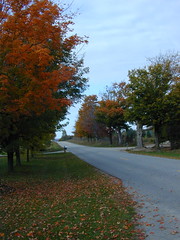 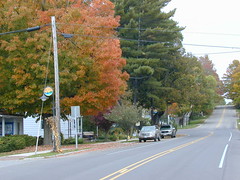 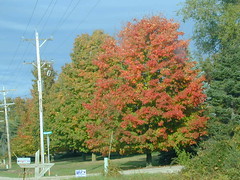 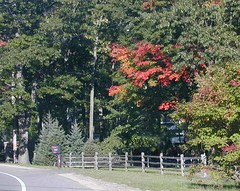 Elk Rapids – September 18, 2010
Leaves are mostly green right now in Elk Rapids, MI, just north of Traverse City, however, there are a few splashes of color from some trees anxious to get the fall color show going. The Big Color Show generally starts here the first week of October and reaches absolute peak between October 10 and October 20.

Newberry – September 12, 2010
A little bit of fall color and a rainbow… Fall colors are just starting. There are splotches of yellow and orange on some of the maples, a few blushes of pinks and reds mixed in but nothing to get excited about yet. (Courtesy of Northcountry Campground & Cabins – www.michiweb.com/northcountry ) 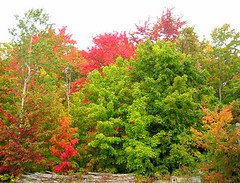 September 24, 2008 — It is cloudy today but the dismal tint of the western sky only enhances the color of the trees. I would say that our immediate area is at about 35-40% with fall foliage. If you came up now, you would see some beautiful trees but if you can wait about 5-7 days, you will enjoy your trip more. — Cathy Clementz – Northcountry Cabins & Campground

September 21, 2008 — Beautiful weather and great weather in the forecast. So far just a bit of color overall in the trees. Here and there, though, you’ll see the early volunteers in full blaze. Peak season is still 2 to 3 weeks away in Traverse City.

September 19, 2008 — FINALLY SOME COLOR AND NEW PHOTO(S) FOR YOU! It is still to early to pack your bags and head this way for a fall color sight-seeing trip but things ARE starting to change a little more quickly. — Cathy Clementz – Northcountry Cabins & Campground 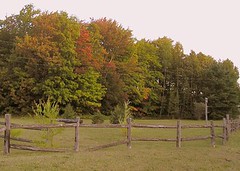 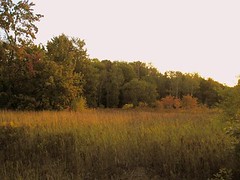 September 10, 2008 — I made a trip to Gaylord on Wednesday. Just a tinge of color in some trees here and there. Otherwise everything was looking very green. Still 2 to 3 weeks away from any significant color in the Gaylord area and 3 to 5 weeks away from the peak.

Here are a couple of photos from Treetops. (Click to enlarge.) 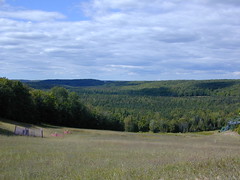 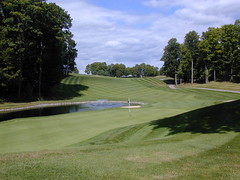 Below are some photos from last year of Benzie County from LuckyGus on Flickr: 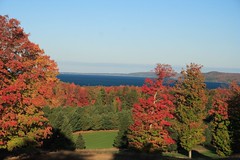 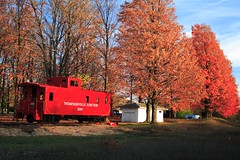 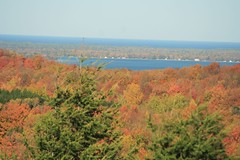